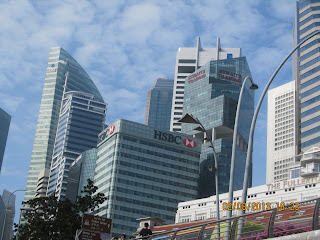 2-9-13, getting set to ring in the Year of the Snake here in Singapore, where the majority ethnicity is Chinese.  The Prime Minister gave his speech on the population White Paper yesterday in English (Singapore English is know locally as Singlish), Mandarin Chinese, and Malay.  Malaysians are the second largest group, and Indians the third.  Looks like England left their language, some buildings, Raffles Hotel, but not their countrymen.  We’ll learn more about that tomorrow or the next day at the National Museum, I expect.

We’re here purely as tourists.  We’ve heard only the slightly defamatory slights of Singapore as “tidy” and “clean,” with there being something untoward about prosecuting illegal drug use avidly (OK, I share that) and chewing gum, too.  But then in China, how about all the spitting in the streets, and kids being carried around with their bare bottoms hanging out?  Personally, I’ll take the ban on gum.

I didn’t know what I’d find here, but it reminds me of the future.  Very dense population in high-rises, blocks of apartments with buildings called “flats” with apartments of maybe 1,300 square feet.  I heard on a podcast today, just incidentally, that Singapore and Finland have some of the world’s best schools.  I read in the White Paper that they are trying to forecast demography, how many people should be here.  There are now about 5.8 million I think; they are forecasting something less than 6.9 million by 2020.  Wisely, they say after that they’ll have to revisit the number because the future beyond then is too vague.  They talk about he need for a Singaporan identity, which they have, but the need to be inclusive of immigrants, emigrants who return, and all groups.  Since they are diverse, they feel the need to work on this.

It reminds me of Sweden.  About the same number of people as when I was in Sweden in 1971-2, an advanced country with a small population, and the felt need to hang together and plan without sentimentality, to pick their spots, their strengths, and to aspire to a certain equality within.  The Prime Minister said they shouldn’t grow at any cost, but that they do need to grow, because how else to make the poor less poor?  No one can expect people to give up what they already have, so the pie needs to grow.  It’s a good size for a country – very controllable.  Sweden is very large, but homogeneous, which makes coherence possible.  Singapore is very small, so even if it is heterogeneous, being small, coherence is also possible.  Imagine if Singapore were burdened with the whole rural countryside of Malaysia – the possibility of focus would be so different.

I’m also wondering about Dubai, also a small city-state, and quite controllable – are they using Singapore as an example?  Do they think the Middle East needs a central spot for finance and trade, as Singapore has provided for the Far East?  Turkey is another candidate for a central trading country, but much different in size, with huge differences in culture between cities and rural areas, I think, and many far-flung towns and provincial cities that are much different from Istanbul.  But Turkey is growing very fast.  Enough about Turkey, it’s just another country on the rise in a key area, a crossroads of the world, like the Strait of Mallaca here at Singapore.

There is a theory that political organization is a major prerequisite for growth, with little corruption and the ability to rule reasonably, to protect property, and to give the possibility of success if it is earned.  Singapore gives that, and Sweden does, too.  There should also be the ability of a state to admit those of merit to the ruling and the wealthy class.  The White Paper dealt with that directly, saving that the government needs to protect the meritocracy.

And then there is the skyline – so many impressive buildings, futuristic which reminds me of the sailboat building in Dubai.  Large malls with lots of shops with luxury goods.  No messing around with public order in either place.

We chose to come here because it was on the way to Bali, and Ann wanted to fly Singapore Airlines, so we thought we’d stop a few days.  We had heard it was a sterile place.  So far, it doesn’t seem that way to me.  It’s interesting.

Budd Shenkin
Posted by Budd at 2:16 AM