If I were running for the Democratic nomination, here's what I might say:


If only “Make America Great Again” were more than a duplicitous slogan! It's not a bad thing to aspire to. You all know how much I deplore The Trump Crime Family Administration, in all its malevolence. But let's take the slogan that they have made so hateful. Let's compete. What would it take to get America back on track?

Countries should make their citizens safe – safety first! How can we make America safe – not just “safe again,” but “safer than ever?”


There are other elements of making America great, but these principles are a start. It's a viewpoint; it's my viewpoint. And I believe it is the viewpoint of virtually everyone running for the Democratic nomination for President. What a banquet of great people running for President we have!

I'm looking to what we can do and what should be, and I'm asking for your vote to make it happen.

I Will Keep You Alive: A Cardiovascular Romance 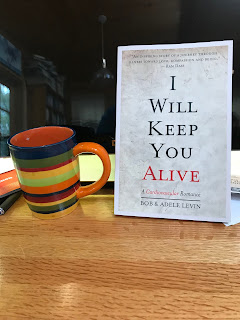 I Will Keep You Alive: A Cardiovascular Romance

by Bob and Adele Levin

I've just read a really terrific book. It's a book occasioned by two heart attacks suffered by Bob Levin, the second one so severe that he was placed in an induced coma for two and a half days, seven stents placed, and a mitral valve operation done later on. Heart transplant was discussed. He was very sick. But, as a benefit of the exquisite progress made in modern cardiac care, now, eight years later, he is hardy, healthy, happy, and much wiser and deeper. More and more people are having this experience nowadays, but I've never read an account like this, with scientific accuracy, precise rendering of the feelings at each stage, the details of what being a patient and the wife of a patient entails procedurally, the adjustment of thoughts as the process goes along, and the adjustment of the marital relationship as one helps the other. And most cogently and beautifully described and delineated, extremely importantly and crucially, this is an account of what a great doctor can do for her patient, and what the very best doctor-patient relationship imaginable looks like. This is what great perceiving and writing (and not over-writing!) looks like.

In other words, I liked it a lot.

IWKYA is written in alternating voices of Bob and his wife Adele, who both bring extraordinary qualifications to the job. Although Bob's background as an applicant's attorney for workers' compensation doesn't help a lot – or maybe it does, seeing all those people in need – he is a graduate of the storied writing program at San Francisco State, a terrific professional writer of both fiction and non-fiction, and an established authority on underground comics, of all things. He also knows a lot of psychiatry, probably mostly through Adele. Adele is also a graduate of the SFSU writing program with multiple short story writing credits and is a retired psychotherapist. So they're great writers, not of the flowery type, but of the closely observed and precisely and efficiently expressed variety. And, they have a longtime very close and romantic marriage, dating from the time Bob drove cross-country to find Adele again after they had dated at Brandeis. Who better, then, to write about the new but increasingly common experience of severe illness with successful recovery? To me, this book rivals Joan Didion's The Year of Magical Thinking, which would please them both, since she is a hero to them.

They both describe events clearly and factually, and their reactions at each step. It's the precise description at every step that is extraordinary. The details! So perfectly set out, no overacting, matter of fact with extraordinary facts, including the ordinary indignities of the hospital, where wife's sleeping area can be two chairs pulled up facing each other, here in one of the most profitable hospital chains in the country, Sutter. Read it and weep, administrators – this is your responsibility.

Each step is new to Bob and Adele, but each brings back their personal memories as they struggle with the present, as when Adele recognizes her present fears in light of her long history of fears gathered from her mother's inordinate fearfulness that she passed on. Bob reflects on his mother's too-long life and her debilitation as she dies in the middle of his long ordeal. At each step their pasts inhabit their presents, as is true for all of us, but it's rare for us to see it as clearly as they do. They rise and they fall, they are hopeful and afraid – but this is cliché, and not worthy of how they freshly describe their steps. Let me just say that one will never understand better the step-by-step impact on a close family of the process of acute and severe illness than from reading this book.

The recounting of details brings up another point: IWKYA brought home to me again how in so many ways, we have entered the era of Star Trek Medicine. It's amazing how much medicine has accomplished, how these little magic catheters are climbing up inside us and fixing things, how doctors put their fingers into our hearts and mess around with them and have lots of options of what they can do. This isn't the focus of the book, but their precise details make it impossible for the sensitive reader to miss. The world might be going to hell, but cardiac medicine is most emphatically not.

And yet, with all the magic techniques and equipment, where you might think computers and algorithms might take over the decision process, this is far from true. There is still a huge need for human judgement. (Mothers and fathers, you can still urge your children into a medical career! We ain't finished yet! And it's not just the human touch that's important, it's the human brain and the human experience.) Which is where we get to the heroine of the book, cardiologist Louisa Muñoz, known here in the text as Dr. Fleur but then, in a stylistic coup, identified by her real name in the appendix at the end, as though the main text has been fiction, which it most decidedly has not been.

If you read nothing else, read this appendix, where Bob and Dr. Muñoz have lunch, and she reflects on the case. Dr. Muñoz embodies everything we could hope for in a doctor who takes charge of a challenging case. She knows what she is doing – she tells Bob that he is lucky to have her at this time, because she just passed her Boards and so she is completely up to date and hasn't forgotten anything yet – and she cares, she befriends, and all three of them fall in love. But that's after a long introductory period, where she sizes them up (and vice-versa), figures out how she can best serve them, with startling perceptive power. She retains her objectivity, but he represents to her all that she could have hoped for – she saves a patient who would have died, (I Will Keep You Alive, page 159) and he turns out to be a very dear human being. And she turns out to be all that Bob and Adele could wish for, all that any of us could wish for, a caring and immensely capable doctor who takes charge in just the right way. When Bob's mitral valve needs to be evaluated and perhaps replaced, she sends him to the local cardiac surgeon who is technically excellent, but who takes over in such a bumptious and self-important way that she has to wrest control back from him, because she says it's not time yet to operate, that she and not he will decide when it's time, and then sends Bob to another surgeon over in San Francisco who is more sensitive and sensible, and who himself exercises exquisite judgement when he gets into the heart, and figures he can tighten the valve instead of replacing it.

[Note to health policy people – this is why patients have to be able to go out of network!]

This, sports fans, is what we need to appreciate. This is how doctors should work, this is the attitude and the skill they need to develop and maintain, this is the ideal. Teachers of medicine – if I were you, I would make this whole book mandatory reading for trainees, and I would dwell on this appendix.

I could go on. I've been known to go on. I could discuss each of their pages with many more pages of my own and go well over 200 pages for this 164 page book (note that, everyone – a short book long on impact. Teachers – especially good for those med students who were selected for their scientific rather than humanistic abilities, which would be the great majority of them.) But I'm just going to stop here.

I've been a doctor and a policy analyst for a long time, and I've read a lot of medical books. This is one of the very best.

Budd Shenkin
Posted by Budd at 4:09 PM No comments: