The Shenkins and ScotRail - Denouement 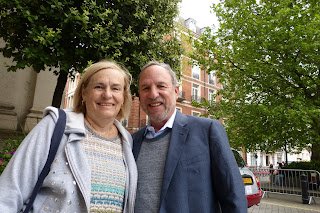 The denouement of the Shenkins' ScotRail adventure approached! This weekend was the expected date of publication for the latest muckraking article by acclaimed BBC personal finance reporter Brian Milligan, this time highlighting the unethical business policies of UK railroads in issuing vouchers rather than cash to reimburse passengers! Who was to be featured? US visitors Budd and Ann Shenkin, whose outraged and ironic comments would turn up the heat on the business bureaucratic miscreants. All was going according to plan.

Then, just before the weekend, I received an email from Brian. There was good and bad news. The good news was this: the so-called Rail Delivery Group had just announced that they were rescinding their policy that had stood for 20 years, and would be reimbursing customers in cash! A great win for train passengers in the UK!

The bad news was this: now the article would not be an outraged, inflammatory feature article, but a news article that, while triumphant, would have a reduced profile, and the Shenkins' comments would be curtailed. Yes, sports fans, for the purposes of the article, it was a case of Premature Capitulation.

Still, what a triumph! The long suffering UK consumers had won a small victory, and possibly (I actually doubt it, by my friend Nick Mathew, a Brit here in Berkeley, urges us to claim it as our own, nonetheless) we had a part in it. O happy day! And, most importantly of course, we got our picture in the BBC. BBC!

So, without further ado, here is the URL, the picture, and the article.

End of the line for rail compensation vouchers

Millions of rail passengers who suffer travel delays will soon be able to claim refunds in cash, after a major policy change, the BBC has learned.
Up to now most train companies have only offered vouchers as compensation.
The voucher system has long been criticised by consumer groups, as vouchers cannot always be used online or to access the cheapest fares.
The Rail Delivery Group, representing train operators and Network Rail, said the change would come in this summer.
"Planned changes to the National Rail Conditions of Carriage will enable passengers to claim their compensation in cash, instead of rail vouchers," said a spokesman.
"This will be a welcome move for passengers."
It is not yet known whether customers with existing vouchers will be able to swap them for cash.

The move marks a major change in policy, as the current voucher system has been in place for around 20 years.
The news was welcomed by Transport Focus, which has campaigned on the issue for some time.
James Daley, a consumer expert with Fairer Finance, called it "a victory for common sense". 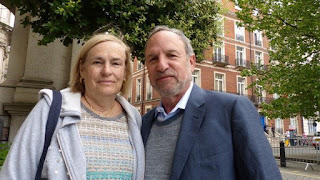 Ann and Budd Shenkin were initially told they couldn't have their money back
It was also welcomed by Budd Shenkin and his wife Ann, two Californian tourists who were frustrated by the voucher system.
After paying for first-class tickets on a train from Inverness to Edinburgh last month, they boarded the train to find no first class available.
When they tried to get a refund at the ticket office, they were told they could only have vouchers - of little use to a couple only in the UK on holiday.
"They sold us seats that didn't exist - and then wouldn't give us our money back," said Ann, a retired lawyer.
But her husband Budd said he was pleased to see that good sense had now prevailed.
"Implementation is always an issue, however," he told the BBC.
"Nothing short of putting a credit onto the customer's credit card without a physical visit to the office should be acceptable."
After being approached by the BBC, ScotRail eventually agreed to refund their money.
Most people don't claim compensation they are entitled to

However, Transport Focus is still concerned that too few people claim refunds when their trains are delayed.
In a survey published in 2013, it found that 88% of passengers entitled to compensation did not bother to ask for it.
And that's despite the fact that the rules on compensation have been widely toughened up.
Nearly half of the 26 train operators have adopted the so-called Delay Repay guarantee, which means passengers are entitled to redress after a delay of as little as 30 minutes.
Furthermore, those train companies cannot get out of paying by claiming that the delay was not their fault, because they, in their turn, can claim compensation from Network Rail if the delay was caused by signalling problems or other network issues.
The companies not signed up to Delay Repay usually offer compensation when a train is at train is at least 60 minutes late.

More on this story