The Images of Children 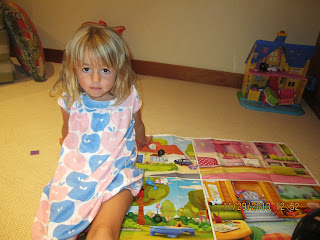 --> It is a truism that we learn a lot from our children, in so many different ways.  Most directly and memorably, we are told what is wrong with us.  It’s often accurate, both what we do wrong in the general world (“don’t tell her that!”); what bad drivers we are (not true in my case, actually); and at times amusingly and at times tragically, our failings as parents.  As Adam Gopnik wryly observes, parents should hope to receive from their children, an probably deserve, are pity and tolerance.

Then, we learn a little more subtly and indirectly.  In the act of being parents we learn about our own parents, and ourselves as the children we were.  We deal with our children’s temperaments and learn about our own.  For some of the kids we have had to give notice, “We are going to leave in ten minutes, so get ready,” because they need that time to prepare themselves.  This is because they perseverate, which means they persevere in what they are doing and have trouble cutting it off.  Then I noticed that this is true of me.  Without thinking about it, I think, my wife Ann has learned to say the same thing to me – she just did it two nights ago! -- “We have to go in about ten minutes.”  3 ½ year old Lola and I need the same warning.

Even more subtly, perhaps, we can see how they see the world, and then realize how we ourselves used to see the world, and how we probably still see it, but that view is hidden behind a veil of verbal and conceptual constructs that we have learned to use.  Which brings me back to Lola.

(Just an editorial note: Ann has warned me for my own good that I should watch how much I talk to people about Lola.  It’s OK to talk to her, Ann, about Lola, because she is her grandmother.  My friend Adele said that I can fire away about Lola to her, for which I am grateful.  Now I have to decide, how much can Lola be in the blog?  Here’s my thinking – the big problem with talking about grandchildren is the captive-audience problem.  So, are you the reader a captive audience?  I’m figuring not.  So here goes.)

Lola is very verbal and active – very – so we get to see what she sees and think what she thinks.  Three days ago she was watching Barney, and pretty soon Lola, Ann and I were marching around the coffee table in a “numbers parade,” Lola with a big number 1, Ann with 3, and me with 7, going round and round just like on Barney.  Then the problem popped up – we were in a circle, and Lola likes to be first, “I want to win!”  It’s hard to be first in a circle, so Lola kept catching up to Ann and passing her impatiently, and then me.  It was thus that Lola discovered the psychodynamics of the circle.  (Ann, meanwhile, being a self-conscious sort, perhaps another element of temperament, kept looking out of the windows to make sure no one was watching what was going on in our house.)

Lola has always been like this, determined.  It has become both determined to achieve, and determined to win.  It’s ingrained.  She’s an only child, no competitors at her level, so she has to beat us – which she does.  It’s just a human variation.

That’s temperament.  Now, view of what goes on around you.  Sometimes, what we see as a means she sees as an end, our process is her prime result.  As an only child, she comes to us to play, so instead of our seeing her play with others, we get involved directly.  A few months ago, she turned to us and said, “Let’s make a list!”

That was a little bit startling – what was she after, going to the grocery store, or what?

The same thing happened a few days later.  She was looking around to do something, turned to us and said, “Let’s have a meeting!”

“A meeting for what?” we said.

“How do we have a meeting?”

That was easy: she sat us down at the dining room table, took some minutes to arrange various bowls and candles on the table, had me sit at the head on her right side, and sat Ann to her left.  We looked at each other, sat a while, wondered if we should make a list, and then, attention span for 3 ½ year olds being what it is, the meeting was over.  Mission accomplished.  If you think about it, it was probably not much different from most meetings in business, certainly in a hospital from my experience.

When we were in Hawaii last month she kept bugging us to “make a hotel.”  I didn’t know what that was, exactly – was it arranging the cushions from the couch in the TV room so that there was a little cave underneath, and calling it a hotel, the way we made a castle last visit?  We avoided her making-a-hotel project until she brought it up for maybe the fifth time.  “OK,” I said, “Let’s make a hotel.”

She got to work in the TV room.  First, it turned out, we needed a front desk.  Turning over the magazine basket provided that.  Then the front desk needed a computer – pieces of a wooden puzzle in primary colors served well.  Then we needed rooms.  I was sent to retrieve her sleeping bag and put it on the floor in front of the TV, and I had my room.  I forget what it was that was the closet.  I lay down in my room, and then tried to position myself so I could actually see the TV.  “No, Baba, you need to stay in your room!” she said.

So while I was resting in my room, she became The Front Desk Girl, sitting up alertly and expectantly for any arriving guests.  Truthfully, she was more professional than many who actually fill that role.  So we had our hotel, however abstract and minimalist it might have been.  We stayed in character for a few minutes, and then I heard, “Baba, the Front Desk Girl is getting tired.”  Mission accomplished, it was out to the pool again.

“First, we need some palm trees!”  I actually forget what we got to make the palm trees, but there were two of them by the window in her room.

A roof?  What was she getting at?  We got a blanket to top of the two posts at the foot of the bed.

Then we were ready to eat, apparently.  I was sent for a bowl of Cheerios, and then we were having breakfast on the bed, under the canopy (or nearly so), and with two palm trees by the window.

Then I realized what the story was.  In the morning at our house in Hawaii, I go get the papers, someone makes coffee, and we go out to sit on the lanai under the roof what we call the pavilion, and have breakfast.  It’s an absolutely favorite part of the day.  Lola then gets her bathing suit on and gets into the pool in the morning sunlight.  Easily recreated in her sunny bedroom in Berkeley.

Finally, Lola as shop girl.  Last year and this we have gone into the City and Sara and Ann leave Lola and me together as they go to Christmas shop.  We go upstairs in Bloomingdale’s.  We look at the mannequins and imitate them, arms akimbo, eyes vacantly on the ceiling.  Lola crawls on the highly polished floors, investigates the fake snow around the mannequins, crawls and pants like a dog.  OK, the commercial motivation is what we think of, but look at it from her point of view.  It’s basically art.  Imaginative clothes to wear, lots of enthusiasm from staff and shoppers, looking this way and that, everyone dressed up, the floors of the wide aisles waxed and cleaned beautifully.  It’s art, it’s a vision, it’s an experience.  Besides being a dog on the floor panting with tongue out, which is fun, what Lola wants to be is a shop girl.

Last week on Bloomingdale’s third floor in a relatively deserted department with an older lady named Lucy, from Boston originally, I bought Ann a sweater.  Lola then helped Lucy by finding a big brown bag in one of the drawers, and then unwinding about 20 feet of green ribbon behind the desk.  She then swiped the charge card and pressed several buttons on the computer.  Lucy just doted, bemoaning the fact that she had only sons, and called to a young colleague walking by, “She wants to be in retail!”

I started out saying we learn from our kids.  One thing is how to have fun!  My friend Herschel says, “You’re never too old to have a happy childhood.”  I do it vicariously with La Lolls, and Herschel does it vicariously by riding roller coasters – I say vicariously, because I have to think he is enjoying giving such fun to his inner child.

But another thing is looking at how Lola appreciates things.  It is in images.  The hotel desk and computer, the palm trees, the roof of the pavilion.  It’s images.  We live an analog life, no matter how much digital technology we employ to get there, the end result is analog, because that’s how we appreciate it.

Also, just as it was inborn in Lola to be an achiever and a participator, it is inborn in her to indulge in the abstract.  Look at those images and what they were represented by.  We are born abstract artists.

These images of Lola remind me of dreams.  We dream in analog images, sometimes incomplete.  Later in life, if she has a palm tree dream, it will be about her happy life when she was three.  Or about her mommy and grandparents and feeling safe and happy.  It will all be contained in her image of a palm tree.

Budd Shenkin
Posted by Budd at 9:52 AM