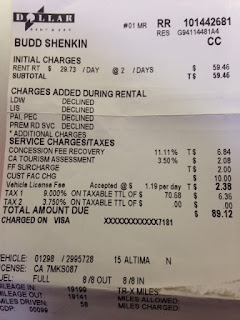 Regular readers will recall our train adventure last year in Scotland where Scotrail did their best to charge for first class and deliver economy and not refund the difference. It took an intervention by the BBC to get us our money back, and to get Scotrail to change their reimbursement policies. Happy ending, which is unusual in any transportation saga.

This year's episode of transportation ripoffs comes from our trip last week to Los Angeles from Oakland, which we accomplished by Southwest Airlines and Dollar Rent-A-Car, and for the time we spent traveling and waiting and standing in lines, we could have done as well by driving the 385 miles, and I will give that serious consideration when the time arises. Seriously, it's probably a 5 ½ hour car trip, and it took us longer than that door to door going down there, and not much shorter coming back.

Why did it take so long? It wasn't TSA's fault – we got pre-checked and the lines were miniscule, although one does have to leave early to play it safe. The biggest fault was at Dollar, where despite having made the reservation on line and having filled out all the requisite documentation, we still had to stand in a line at LAX for 40 minutes while the groups of young people diddled around with the staff in making their rentals, and the staff had to take a break in the back room after each transaction, and where the technology was so slow that it took about 15 minutes when we finally got to the counter. Dollar really sucks. Next time we'll go Hertz or Alamo, where you arrive at the agency and move straight to the lot to pick up your car. My brother did that with Alamo and it was cheaper, too. We will adjust; there are alternatives.

But here's my consumer complaint that is more like the Scotrail trap of last year. Look at the receipt at the top of this article. You see that the rental rate was $29.73 per day for a total of $59.46. Fine, that's what we contracted for, I think, somewhere near that figure, anyway. And you see that we declined all extra coverage, and that we filled the gas tank before returning the car so we weren't charged for gas – I had to show the receipt for the gas to the Dollar attendant. OK. But what's all that other crap underneath? “Concession fee recovery” for $6.84? What the hell is that? “FF surcharge” for $2.08? “CUST FAC CHG” for $10? What the hell is that? Two taxes, well, OK, they do tax everything for tourists everywhere. But what are all those extras?

Who knows or cares what the extras are? What we care about is the final score. Which is, unbelievably, $89.12!

In other words, the total for renting this car from Dollar is 50% higher than what you get from the basic per day charge.

How is this not fraudulent, I ask you? Why does the web site say only $29.73 a day, and not $29.73 + 50%? How is that not false advertising? How is that not like the small print in a credit card contract or a cell phone contract? Is this truly the “American Way?”

I'm hoping Elizabeth Warren addresses this soon in one of her speeches and refers it to the Consumer Financial Protection Agency, and asks Trump what he would do. Don't you think? I mean, 50%? What do they think this is, a payday loan?