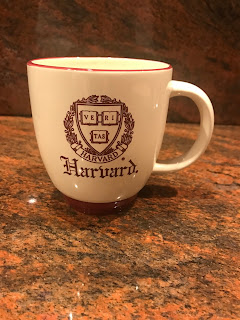 There were 10 or 12 of us sitting in a circle on Friday morning, and Judy said, “It's just too bad we have to die, when this is the best part of life.”

Yup, that was it. “That's just what I think!” I said. I was the only other one I had heard say that.

These were some of my closest friends in the Harvard Medical School class of 1967, which now seems both long ago and yesterday. We were lucky to be sitting together here in the lounge of Vanderbilt Hall, our dorm for the first two years, where we descended the 15 steps or so into the dining room, where my classmates had spotted me every morning in September of our second year, calling out, “What happened to your Phillies last night?” during one of MLB's legendary chokes – it had to be the Phillies, didn't it? Here in Vanderbilt is where we became so close. Not Judy and I, necessarily, which was one reason I was so startled. She had declared herself hell-bent on being a “five days a week psycho-analyst” from the very start, which was probably pretty intimidating to me, since I had no idea where I would be headed, and coddled as I had been, barely wanted a job. And she was a Jewish woman, which was just what my mother was, although from New York, while we were Philadelphians – big difference. But here she was, making my point.

HMS hadn't made it easy, then or now. Just to have access to this room to sit with each other, we had had to insist on our class listserve that the primary purpose of the reunion in our eyes wasn't as a donation opportunity, that we didn't necessarily resonate to the administration's declaration that “The World Is Waiting.” TWIS for HMS? Doesn't that really say it all? And the vacuous, fatuous declaration from the staff organizers, “The Best Reunion Ever!” Right, right. And just why would that be?

I had made the point on the listserve that what I really wanted was to sit down and be with my classmates, and that had gotten a lot of resonance. Judy had said, being practical, couldn't we just have a room? Someone else added, hey, you're sitting on a $23 billion endowment, think we could have a room? It took a lot, this was not easy thing, we were only notified at the last minute, but yes, at the end, we had access to a room where we could sit together, here in Vanderbilt.

I felt the same as Judy, all the boxes had been checked. Had a career, took care of people, accomplished some stuff, set up for retirement, raised the kids more or less successfully. Jimmy chimed in from the other side of the circle that he didn't feel that he had done everything. “I took that long trip to South America senior year, and I thought I had to write a report when I returned, but I didn't. But I still think I do, and I haven't done it yet.” Whimsically said, but then, we were all doers, all responsive to expectations, and it's strange to give that up. I remember when basketball and pursuit of women (girls, actually) were what life was all about and school was something to do well, but not for fun. Now here we were and professional progress had taken over first place, and finding fun for fun's sake had to be recovered, but on the positive side, work had become a lot of fun for so many of us. Isn't it too bad, having got this far, that we will have to call it quits at some point that we are closer to now than we were then?

I'm not one to come into events with expectations, although clearly I hoped to “reconnect,” to see where things had turned out, and what we thought now about what had gone on then. I noticed that everyone was now much more confident than before, which shows how tentative we were then. Now, we had done what we had done, and we had measured up more or less, I guess. There wasn't a lot of preening – there was some – but more like a common feeling that we had survived. I saw my old friends, and Larry said it was too bad we didn't live closer. That was nice to hear. John, old friend from undergrad and HMS and next door neighbor in Vanderbilt, who had nominated me for class VP where I had served (social chairman was a better functional description) for three years, mutual warmth after all those years. Doug from Alaska, always introverted, with whom I now could connect. Don from NYC still with his Arkansas lilt, bringing the message to get that LDL down and live into your 90's! Mona whose husband and daughter wrote “Fuck Feelings,” which we later saw featured over at the Coop in Cambridge, what a great bookstore.

Phil has been a big organizer of reunions, which is a surprise since he wasn't particularly a class leader, but somehow he volunteered and feels deeply about HMS. He and others established a scholarship fund “untouched” by Harvard administration. That's great, show's a healthy skepticism, but in the end money is fungible, but I honor what they have done and their feelings behind it, even if I do not share it. At our intimate dining experience at the St. Botolph's Club on Commonwealth Ave. Phil had observed that there were many who seemed not to appreciate HMS the way he did. “How can they not appreciate what Harvard has given us?” he said.

Well, that's an interesting question. I think fewer than half our class came – 10% are dead, but even half the survivors didn't show, I think – which tells you something. One thing is just technique. I've done this kind of thing, and what you need to do is call everyone personally and engage and let everyone know you, as the leader, want them to come. And make the objective to connect, which is what we want to do, to feel wanted. Instead of sending out a fund-raising letter with a little note in the margin that “we are hoping for a 'stretch' donation! And it will be great to catch up.” Figure it out. (I've compared us graduates with money to the pretty girl who wants to be loved for herself – you can continue with this comparison if you want.)

But in fact, there is a lot of resentment. I talked to Ira and George in front of Vanderbilt, and Ira talked about how he had been abused by housestaff (interns and residents, for you non-doctors reading) on the wards of the Brigham. He had made a rational decision at 2 AM not to awaken a patient to get the med student history for next morning rounds, which would have been in addition to the intern and the resident work ups, and when he was empty handed the next morning and explained his concern for the patient's welfare, the resident in charge had vowed to give Ira pure scutwork the entire next week. Ira went to the Dean of Students who had then called the hospital and complained in his behalf. Ira had had contretemps in his medical life thereafter, and wished that HMS had prepared him on how to deal with those who would take advantage.

I had had some similar hazing from housestaff at the Beth Israel. George, a soft-spoken upper midwesterner, related that he had wanted to set some goals for his daughter so she would have some direction, either towards where he suggested or maybe against, but something. So he thought, what about medicine? Then, from depths he didn't know he had, came out the conviction, “No! I don't want her subjected to that abuse!” He hadn't even known it was there, but there it was. And Phil wonders why everyone doesn't see things as he does. And Phil, these are the guys who showed up.

For myself, I didn't know this was going to happen, but somehow at this visit, I buried the hatchet with Harvard. Yes, they didn't tend much to feelings, they didn't help us understand the process we were going through to become doctors – there was some fake it before you make it, I think, in retrospect. And it's a very hard process, to some extent one that I still wrestle with. Doctors get a lot projected onto them, healers, authority, helpers, confidants, other stuff. They could have mentioned it.

But still, here were my classmates, and I appreciated them so much. Not only are these good people, they are my brothers and sisters, because we came in together undifferentiated, and as different as we are now, as much as reunions are exercises in observing the damage that time has wrought so some of us have to reintroduce ourselves to one another to be recognized, as much as we compare our health report cards like Miami Beach ladies on the park bench, still, we came from the same medical womb and here we are years later. So I found most of my resentments melting away, realizing also how much of it was me and not them. I was young.

Doug wrote to me and I hope we can get together when he's in town. I'm going to write personally to several others and tell them how nice it was to see them. I'll have lunch with Carol, who lives probably just a mile or two away. I'll go back for the 55th, God willing. And unexpectedly, I had a good time with my wife in Boston, despite it's being the home of the Celtics.

Rich said years ago that the strength of HMS is in the students. It was startling to hear at the time, and I was amazed to think that it might be true. I couldn't think in such terms while I was still in the minors. But it must be true. What HMS gets is permanent position for the lottery draft picks, and as Dean of the dental school Bruce says, they figure they do well if they don't screw us up. That modesty is quite possibly false, but still, it is engagingly far away from The World is Waiting.

And you know what? I'll give them some money they don't need, just as a token. For my classmates, who it turns out, I probably love.