The Weight of Ink, by Rachel Kadish 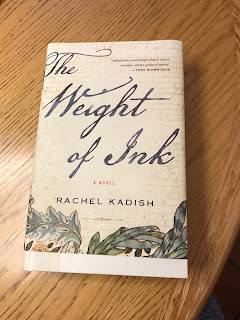 Sometimes, you just don't where it will come from. My favorite book for this summer is The Weight of Ink by Rachel Kadish. The name “Kadish” is probably not familiar to you, but it's the name of one of my best friends in medical school, Larry Kadish. We were guards together on many a basketball team. We worked well together, mutual respect and affection. He told me, one of the great compliments of my life, that I could be hung over, exhausted, or sick, no matter, I would always get my points. How can I not love Larry?

Then, halfway through med school he married one of our classmates, Anna Stein, from New York, but before that from Holocaust Poland to the US through the Eastern route. At our reunion in June, I told Anna that I played cards with a fellow Jewish pediatrician who was from Shanghai originally, and I had told him that my classmate Anna had escaped through China. “Japan,” she said, “but close enough.”

I still feel a little guilty that when Anna went into labor and I had volunteered to stay with Larry while she was in labor – in those days I had the idea that men stayed outside the delivery room and smoked, although neither of us did, but maybe we would – but when she went into labor I was at home in Philadelphia and missed my support role, which was big in my eyes. I called Larry a few years ago to apologize, get it off my chest. “That's OK,” said Larry, “I really don't remember anything about it (about my promise to be there, not the birth).” Maybe I wasn't as central to that story as I thought I was.

So, Larry and Anna have a daughter, Rachel. I don't even know which child she is, 1, 2, 3, or 4, but she's in there somewhere. And it turns out she is a writer of novels. They have admirable restraint and didn't go all around the reunion saying that their daughter's book was coming out, after 12 years of working on it, at least not to me, but Ann finally couldn't help it, she posted the link to a New York radio interview of Rachel on our class listserve, not saying anything, just posting it. (www.wnyc.org/story/weight-ink/)

Out of loyalty to them I felt I had to listen, and the book sounded interesting and she sounded charming and intelligent and winning, although if she weren't their kid I wouldn't have voluntarily picked up a book about a blind Jewish rabbi and his female scribe in 17th century London. But I then ordered it on Amazon and put it ahead of finishing my current book, the newest Hitler biography (it's very good – hadn't really understood at all about the Beer Hall Putsch and Weimar Germany).

But then as I read, I found that I couldn't put it down. It's just one of those books you hope to find, a book that you hurry through to the end because you can't put it down but that you don't want to really end. A book that you want to keep with you if you can, maybe just to be able to look at its cover. Twelve years, and it reads not at all like the ponderous title of weighty ink, but flowing sentences, good sentences, and an intricate plot that connects all the way through – at least I think it does, I'm not real good on plot lines.

It's one of those books that alternates chapters of two different stories that are connected. One is the accidental discovery in 2001, in a house dating from the 17th century, as it is being redone and updated to greet the public as a museum, of a set of manuscripts from that period. The owner calls his old medieval history professor, Helen Watt, a seemingly severe English woman about to retire, who we find has a history of being a gentile in the new Jewish land of Israel where she fell in love with an Israeli and loves him still, although in absentia, since it didn't work out. She recruits an American Jewish doctoral candidate, Aaron Levy, to help her. Both are fluent in English, Hebrew, Portuguese, and Latin, I think, and they piece together the meaning of the documents and the history of the people, as they battle in the competitive academic bureaucracy. It is the find of a lifetime, this set of manuscripts of the letters of the rabbi and household accounts. Gradually they piece together the story.

We, however, know much more than they do, because every other chapter traces the life of the rabbi and, more centrally, the scribe, Ester Velasquez, both of whom were exiled from Portugal, the rabbi blinded by the Inquisition, then to Amsterdam, and thence to London in the continuing diaspora. London accepted Jews under Cromwell, perhaps for the business, perhaps because the Bible foretold that the Messiah will appear only when Jews are everywhere. A great picture of what life must have been like for these Jews, the women working hard in the houses and aspiring to little but husbands, the wealthy and the poor living very different lives, the continuing value of learning, life as it must have been lived in the Interregnum and the Restoration. But the excitement of the 17th century story is not only the personal stories – which are good – but the intellectual progress of Ester, and through her, letting us see what the Jews were thinking about, and contending about. Letters go out to many of the well known intellectuals with Ester's razor-sharp questions and logic, to be answered by some, including Spinoza. She resists marriage as it would be a cage, at least until the great plague, and then the fire. It's a compelling, compelling story.

Helen and Aaron, meanwhile, have their own trials to endure, they own paths to follow, their own dilemmas to be faced, their own characters to be probed. The introverted English and the extroverted American, familiar territory, but wonderfully evolved. And in both parallel stories, there is so much of the lives of women, and men, and the process of choosing a mate for feeling and the risks of doing so, and chance, and the continuing story of the Jews, of whom I am one but of which I know so little. I knew in theory what a feat it has been to keep a people alive as a people for eons without a homeland to live in, but this book lets me see that a lot more clearly. It's a serious book, but an intimate one, with continuously touching stories, the kind where you want to break the fourth wall and talk to them. This daughter of Larry and Anna can write.

And then I finished and I reread the comments on the book cover. The front cover has from Toni Morrison: “A gifted writer, astonishingly adept at nuance, narration, and the politics of passion.” I hadn't thought about passion having politics, but now that she points it out, I guess that's right. The back cover has compliments from five authors, and it was only at that point that I realized they were all women. What I had read and loved was a feminist book! Yes, I realized all the way through that she did women better than men, but I hadn't realized that so much of what she was writing about was the plight of women, and the over-weaning nature of so many of the men, although there were good ones, to be sure. But we don't see them as intimately as the women. How come I didn't notice?

Well, I don't notice a lot of things, and when it comes to fiction, I'm no expert, I'm more of an “I like it” kind of guy. Although when pressed, I guess I can hold my own. And I do hope I get pressed on this one, because I think it's a deep, rich book, one that can stand a lot of examination and discussion, and a lot of love.

I wish I could say that is the child whose birth I missed, but probably not, probably a later one. But whatever, even though I don't see them much, these are my dear friends, my classmates, and they have birthed and nurtured someone who has worked so very hard at her craft to be able to produce such a book, and worked very hard to learn enough to produce this very one. As I wrote to Larry and Anna when I was on about page 75, I think this should be a National Book Award contender. I'll stick with that.

Larry, it might be true that I will always get my points, but Rachel has just racked up a lot more than I ever could.