The Virtues of Professionalism 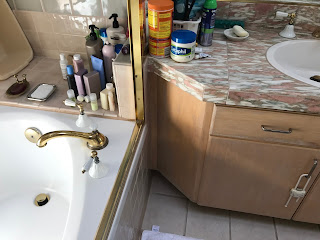 When you get older you have to be more watchful. You have to think, what could go wrong? Visit the doctor more faithfully, don't drive when you're tired, be more organized so the chance of error is reduced. And, most importantly, beware of falls. Look before you leap. Keep yourself poised carefully on your haunches as you push that trash can down those three steps toward the street on Sunday night for the trash collectors on Monday. Falls are far and away the most looming hazard as you get older.

And I should add that as you get older, you get smaller as your spinal discs shrink as you lose muscle mass and other mass. You lose one inch per decade, we were told at our med school 50th reunion by our classmate Don Smith. I tell people that I myself used to be 6'4” and played shooting guard for the Warriors, although who remembers that now?

But I digress. I was talking about falls, and prevention. Falling is an ever-present danger. My new Blue Hen friend Jim Dean told us that every time he goes to the doctor, the doctor's first question is, “Have you fallen?” It is that present a danger. And we also know that most accidents occur in the home – not surprising, since that's where we are most of the time.

That was when I noticed how dangerous our bathroom is. We have a deep tub, and that is where we shower. Since the tub is deep, we have to perform a balancing act as we get in and out. Stand on left foot, raise right foot high to get over tub wall, stick right foot over tub wall to bathroom surface, place it on floor, shift weight from left to right foot, pick up left foot while balancing on right foot, pull left foot over wall, and place left foot by right foot, at last standing on two feet. Perhaps easier done than said, but still, imagine the hazard.

We were forethoughtful enough to have made the surface of the tub slightly gritty, so that the danger of slipping is minimized. But, and this is a big but, while you are doing all this, there is nothing at all to hold onto. Well, there is the sliding glass partition that keep the shower water from splashing over the bathroom floor, but the frame for those two sliding doors is fragile. If we were to slip and grab the glass doors, they would likely fall down with us and probably shatter. Not much help there.

So I went down to our neighborhood kitchen and bath rehab place, Custom Kitchens, and presented the problem. My idea was that as we climbed in and out, we should have a little grab bar on the counter surface just by the sink, which is very close to where we step in and out. It would be unsightly, it would take space, it would be hard to squeeze the grab bar into that small surface, but it would be safe. The guy at Custom Kitchens thought it could be done, I convinced Ann it was the safe thing to do, and although it took months for the guy at Custom Kitchens to actually get it together, we were ready to go. Safety over style.

Then, and this is the point of this post, there was a switch of personnel assigned to our project. Instead of Eric, Karmela came out to our house and was looking to match colors and surfaces for the grab bar. And then, as she was looking over the project, Karmela said, “You know, there's another option here.”

She looked up from where the grab bar would be and saw that the wall just beyond the end of the tub was just close enough to where we stepped out that she could bolt a retractable grab bar right into it. This retractable bar, or rather a swiveling bar, would be vertically parallel to the wall when in repose, but then when we were ready to use it, we could pull one end of it down so that its length was now perpendicular to the wall – that it, it stuck out from the wall just where we could grab it as we exited. Then it would unobtrusively pivot back up vertical again when we had stepped out, unobtrusively out of the way. Saving the counter surface where the original grab bar would have been, making it look much nicer, preserving precious space in our small bathroom.

Now here's the point. Believe it or not, there is a public policy aspect to this short story. When I exclaimed wonderously how great Karmela was, and she felt proud of herself for coming up with this graceful solution, she told us: when she had gone through her testing to get her license as an interior designer or whatever her qualification is, she had had a task: design a bathroom for a handicapped person. And that is where she had come across a similar solution that she was now applying to us.

A certifying board? Qualification for this rather mundane near-profession? Isn't that just more bureaucracy, designed to keep competitors out, to glorify a job? Isn't this one of those 500 plus boards that have proliferated in the state, that supply sinecures for political supporters to be appointed by the Governor? Isn't that the waste of big government? Haircutters, nail polishers, things you've never heard of, all certified with so-called standards?

You might well say so. I might well have said so. But no more. Sometimes, just sometimes, things work the way they are supposed to. Bless you, Karmela, and bless the board which qualified you. We will now step in and out with both safety and style.

Who says the days of big government are past? Not I.

Budd Shenkin
Posted by Budd at 7:12 AM