The Midterms and the Dem Organizational Problem 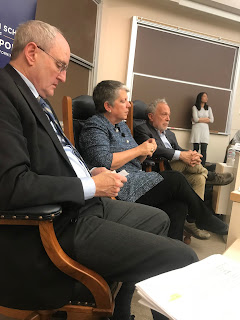 On the afternoon of Halloween, I went over to the Goldman School of Public Policy at Cal, where Dean Henry Brady, President of the University and former Arizona Governor and Secretary of DHS Janet Napolitano, and famous Professor Bob Reich opined on the coming midterm election. Henry discussed the four-part split of the Republican Party and the difficulty of their negotiating their conflicting interests. Napolitano discussed the closeness of the coming race and her optimism on the Dems capturing the House. Reich discussed his pessimism over the gerrymandering and voter suppression of the election, how both Democrats and Republicans had overlooked the problems of the non-college education whites over decades and the economic hardship and resentment this had caused, and how the underlying issue of the election was now authoritarianism vs. democracy, all of which left him pessimistic. He doesn't see the Trump election as an aberration, apparently. In an effort to be optimistic, all agreed that the generation of the students in the room were more engaged than any they had encountered in years, and Napolitano observed that actions and reactions are the way of politics.

When Henry read my question to the panel, which was "how come the Democrats are launching such small bore issues for the election?" Reich smiled knowingly and glanced sideways at Napolitano, who replied that the issues weren't small bore at all, health care is important, but one has to tailor arguments to each locale.  That latter is true, but the national organization's role should be to set a tone and some general perspective in a skillful, inclusive way, and not just rerun "protect Social Security" for the millionth time.

At the reception afterwards, I spoke with Napolitano, whom I had not met before. I asked her about Diane Feinstein's decision to run again at age 85, observing that I imagined that she could not really answer the question. She said that she liked Diane, that she was surprised that she had run again, and then wanted to say more, but then agreed with me that she really probably should not say anything else. She asked me what I thought.

I told her that I was appalled by DiFi's decision. If she had retired, there would have been many competent applicants for her job; it was a rare chance for someone younger to move up. I said that I thought it reflected the Democrats' misunderstanding of the task at hand. Their task is to find the younger leadership within their ranks and nurture it. If one views the Democratic party as an organization, what organizations need to do is to assure their vibrancy as they move forward, to identify, to nurture, and to promote the talent for leadership within their ranks. Think of it as a corporation. There, competent leaders would be conscious of the need to find and promote the talent, and not to let it languish. They would look out and say – “Look at her, over there, down in the ranks. She's great! Let's move her up! Let's get her more experience, more authority, develop her!” That's not what we hear from the Democrats. Instead, the gerontocracy keep their places as long as they can, and aspirants for higher office are left to fend for themselves. That's one way to let leadership emerge, but to my mind, not the best way. It's too chaotic, and it doesn't select for competence.

Then, probably thinking that this was the perfect opportunity to drill for an opinion from a random but well-informed Democrat, she asked me what I thought about Pelosi. Happy to be asked, I phrased my answer as artfully as I could. I told her that Nancy had done a wonderful job in her career, and she should be honored for it. But the Congress is a complex organization. There is an inside job and an outside job. Chuck and Nancy might do a wonderful job on the inside operations, but as Trump has shown, there is a crying need for doing the outside job, of speaking to the country and leading its thought. Trump is good at this, and the Democrats are Little League compared to him. They need to compete with him better on the battlefield of public opinion. This requires new leaders; we need to refresh the screen. Obama reflected that after eight years he was required to leave, and although he regretted it (and although we certainly have come to regret it,) he thought it was a good thing. Organizations need to refresh. So, to conclude, I think it's time for Nancy to move on.

And in fact, that's not enough. The Dems need to consider there whole operation in terms of fostering leadership. I had coffee a few weeks ago with six-term Congressman Jerry McNerney, who now represents the Stockton area. Jerry is a scientist, which makes him a rarity in Congress. He would be a natural for leadership of one of the scientific committees, energy or environment. But because of the seniority system, which the Republicans have abandoned but the Democrats have not, Jerry will be forever mired far down on the committee membership list. This sort of process makes Congress a dead place for leadership development; the best will abandon it or be unhappy and un-influential. This is the description of an ailing institution. And it seems to me that the Dems don't seem to understand that this is their problem. If the Dems are conscious of their decades long losing, they might consider the need for leadership, and they might consider how their organization is sabotaging their ostensible efforts to win.

Or, to put it differently, if I have to listen to Nancy Pelosi, Chuck Schumer, or Tom Perez orate on TV once more, I'm going to scream.

Napolitano told me she agreed with me. Then I told her that if the election went badly, as Bob Reich feared, then the entire leadership of the Democratic Party should resign, just as would happen in the UK after a failed election. Just as I said this, Reich came up to us, gave me a little startled look as he heard my peroration, smiled, and then thanked her for coming to the session, and she replied that it was very refreshing for her to get out of the President's office and to participate, and I excused myself since I had been monopolizing her time and she should really mingle more.

Before I left, I also told her that while I understood Reich's pessimism, I had found a source of optimism within the recent tragedies. Look at the reaction of the congregation in Charleston after the murders there, the reaction at Margerie Stoneman Douglas High after those murders, and in Pittsburgh after those murders. The deep understanding, the dignity, the bravery, the spirituality, the commitment to democratic action and the better angels of our nature displayed at all three areas (all of them disenfranchised, note – youth, Blacks in the South, and urban dwellers,) the principled and civil way they spoke out against Trump, spoke of a deeper spirit of America that will not be trampled over. We might have a difficult row to hoe for a while, a large part of our governing body has shown itself to be craven and corrupt, but in the end it is the spirit and traditions of a people that are the determinative forces, and I have faith in America.