Presidential Pardon - A Long Article, and an Oped 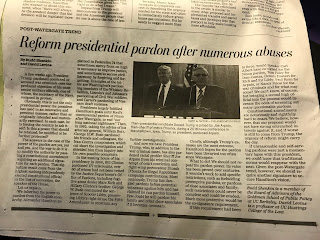 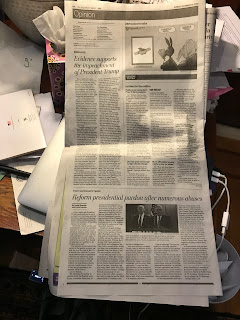 Back in February I wrote a blog post suggesting that the power of the Presidential pardon has run into problems of abuse, and needs to be reformed.  I suggested requiring each pardon to be co-signed by the Speaker of the House.  Here's that post:

Then I acquired an excellent co-author, my friend of 30 years David Levine, who is Raymond Sullivan Professor of Law at UC Hastings College of the Law in San Francisco.  Together we wrote a 6,000 word article advocating this proposal, which was published in the Hastings Constitutional Law Quarterly:

And now we have reduced those 6,000 words to a succinct 650 words oped, which has just been published in the East Bay Times:

Frankly, it's a thrill for David and me to see our work make it to both legal and popular publications.  Beyond that, maybe it's even possible that the idea will make it to the stage of formal consideration when post-Trump reforms are being entertained.  That would not only be a thrill for us, but a source of great satisfaction for helping to support the idea of America, which animates both of us.

Here is the text of the oped:

A few weeks ago, President Trump pardoned convicted or accused war criminals over the profound objection of his most senior military officials, one of whom, the Secretary of the Navy, resigned in protest.

Obviously, this is not the only presidential power the President has used in an innovative and personal manner, rather than as originally intended and customarily exercised.  In each case, he is forcing the country to ask itself – is this a power that should be retained, be modified, or be further protected?

We believe that the answers to these questions in the case of the power of the pardon are yes, yes, and yes.  And the way to do it, we think, is to modify it by passing a constitutional amendment to require an additional signature for each pardon.  That signature would come from the highest ranking independently elected constitutional official in the line of succession, the Speaker of the House.

We inherited the power to pardon from the English monarchy. Alexander Hamilton explained in Federalist 74 that sometimes mercy from on high is necessary to improve justice, and sometimes to secure civil harmony by forgiving and forgetting.  Examples of the latter are Washington’s pardoning members of the Whiskey Rebellion,  Lincoln’s and Johnson’s pardoning of Civil War soldiers, and Carter’s pardoning of Vietnam draft resisters.

Presidents largely fulfilled Hamilton’s goals until Ford’s controversial pardon of Nixon after Watergate, to end “our long national nightmare.”  Then in 1992, taking the advice of his Attorney General, William Barr, George H. W. Bush pardoned his friends and colleagues, the Iran-Contra conspirators, which cut short the investigation and shielded him from inquiry into his own possible complicity.

In the waning hours of his presidency in 2000, Bill Clinton pardoned 177 miscreants, over 60 of whom had not been vetted by the Justice Department’s Office of Pardons, including fugitive arms dealer Marc Rich and his wife Hillary’s brother.   George W. Bush commuted the sentence of Scooter Libby, preserving Libby’s right to use the Fifth Amendment to constrain any further investigations.

And now we have President Trump, who, in addition to the war criminal cases, has also pardoned racial profiler Sheriff Joe Arpaio from his criminal contempt of court conviction and right wing provocateur Dinesh D’Souza for illegal Republican campaign contributions. Most ominously, Trump has dangled pardons before potential witnesses against him, has claimed he can pardon himself, and  few doubt he will pardon his family and other close associates if it becomes necessary.

Clearly, although Trump’s excesses are the most extreme, Hamilton’s hopes for the pardon have been thwarted too often since Watergate.

What to do?  We should not repeal the pardon power, because its value has been proved over centuries.  We don't think it would work to add specific restrictions, such as forbidding preemptive pardons, or pardons of close associates and family; such restrictions could never be complete and could be evaded.  Much more protective, we think, would be the  co-signature requirement.

If this requirement had been in force, would Speaker Carl Albert have co-signed for the Nixon pardon, Tom Foley for Iran-Contra, Dennis Hastert for Rich and for Libby, Paul Ryan for Arpaio, or Nancy Pelosi for the war criminals, and for what may come?  We can't know, of course, but bringing a second high official into the process would increase the odds of screening out many questionable pardons.

Constitutional amendments are notoriously and rightfully hard to enact.  We believe, however, that our proposal would not have strong entrenched interests against it, and if worse is still to come from Mr. Trump, the urgency of reform might carry the day.

If unreasonable and self-serving pardons were just a momentary lapse with this president, we could hope that traditional norms would reappear with the next. Given the post-Watergate trend, however, we should require another signature to secure Hamilton's vision.