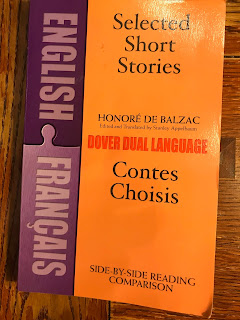 Don't ask me why, after all this time, I have finally gotten around to reading Balzac. It's a long story. But here I am, reading his selected short stories in a Dover Dual Language edition, French on the left page and English on the right. My friend Angela, a Professor of French Literature, specializing in the 18th century, when she was reviewing the great writers for me last September, simply said, “Ahhh, Balzac!”

What I have just read is the 5th story in the book, The Forsaken Woman, or La Femme Abandonnée. Balzac is a “realist,” OK, but this is such a romantic story. You discover who you are when you read, and especially when you write, and it turns out that I have distinctly romantic tendencies. I believe in love at first sight, for instance – does that qualify me? I don't know.

Here's the story, and spoiler alert – I'm doing the plot fully, including the shocking ending.

It's about 1832. Young Parisian baron Gaston age 21 goes to Normandy for his health, finds older woman, age 30, countess, living in solitude there, perfect grace and manners and intelligence, excluded from even provincial society for the sin of having had intense love affair with married man who then abandons her in murky circumstances, and for whom she continues to carry torch and accuse society. The young man sees her briefly without meeting her, falls intensely in love, inveigles himself to an interview at her chateau, she is frank with him with knowledge they will never meet again, he writes to her to declare his love, saying she either accepts him or he leaves the country, she answers back that he is being ridiculous and typical of his age and should stay and follow his illustrious destiny, he says that choice she wishes for him is to be a nobody and be ridiculous, she leaves area clandestinely but he finds out and follows her to Lake Geneva, where she discovers that this is what she was hoping for and they live together in indescribable love and harmony for nine years when they need to come back to France for family reasons, where they have adjoining estates and live together but his mother objects and won't even meet her but insists on introducing her son to a young rich airhead. Countess then writes letter to Gaston saying that at 40 she is washed up but at 30 he still would have inestimable possibilities and she will let him be free, he responds by saying no but she knows that his phraseology means he is wavering and she sends letter back declaring him free, and within two weeks he marries the airhead and she becomes pregnant in one month, following which Gaston realizes he can't live without the countess and sends her letters which she won't open, he arrives clandestinely to her castle and sees her near-death distress, enters the room and she threatens to jump to her death if he advances farther, he returns home to his airhead and the estate and shoots himself dead. Balzac observes that a wife may endure sharing a man out of higher social considerations but a mistress must loathe it, because in the purity of her love resides its entire justification.

Reading this exquisitely written story – if it weren't exquisitely written, who would care? --breaks my heart. She is so wonderful and so is he. It is so romantic. What am I, a girl? My father would kill me, my mother would look at me askance, who knows who would take me seriously? What will I do, watch soap operas next?

But I can't help it. I'm a sucker for Casablanca, too, and for North by Northwest. Classy and romantic. Is this really why I am studying French? They say, and my French teacher Claude (Swiss!) asks me if I believe that when you learn a foreign language you become another person when you are speaking and being with it. I believe that is true.

But truth be told, I might be at my best when I'm listening to and speaking Swedish. Now, that's an underrated language! But my French is coming along, and I don't think there is a Swedish Balzac. So I'll just take it as it comes.