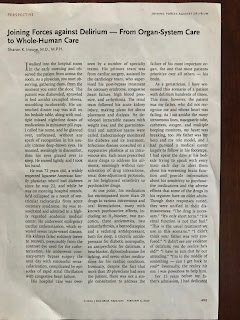 How Hospitals Abuse The Fathers Of Physician-Daughters

Discoordinated inpatient care for acute conditions is a chronic disease in Academic Medical Centers, and other large medical centers as well. No one is in charge! No one person takes responsibility! Too many of the “team members” - what a misnomer that is! – partake of “it's off my plate” disresponsibility. I'm using the prefix “dis” rather then “un” because it seems to me there is a sense of active neglect, not just passive. J'accuse!

With any task, two basic factors affect your performance – incentive and ability. Is there something that makes you want to do it? It can be internal ideals – I want to be a good doctor, I want to help these patients. Or it can be external influences – it makes me money, or it helps my prestige.

The second factor is ability. Do you have to tools to bring to the task? Has the necessary procedure been invented, and all you have to do is apply it? Or, if the procedure isn't at hand, can you invent it? Are you smart enough to apply the tools, or invent them?

So, why is it that we hear so repeatedly about the discoordinated care, the poor quality care for an individual patient so often? I've blogged about this before, referring to a Health Affairs article where a doctor-daughter was unable to intercede in her father's acute cardiac care at a big medical center to forestall obviously poor actions by the doctors and nurses. http://buddshenkin.blogspot.com/2018/10/the-hazards-of-hospital-care.html.

Here, a geriatrician-daughter finds her 72 year old father grievously mistreated after a high intensity cardiac event that brings him to an academic medical center, where team after team prescribes drugs discoordinating with the other teams, and where her father becomes severely delirious. Ironically, it is the daughter herself who in the past invented exactly the procedures to use in an inpatient setting to prevent delirium – the large medical center has not implemented these procedures, and or course she is unable to intervene in the rigid procedures of the discoordinated team to help her father. Luckily, he recovers and even goes back to his medical practice for a number of years, as did the father of the Health Affairs patient. Both cases have successful outcomes, thanks to advanced medical science, despite the severe errors and thus over-extended medical stays because of complications due to discoordination.

Why does this continue to happen? Why isn't a single person held responsible for each patient? Why isn't this obvious, repetitive problem solved? Why are not proved administrative procedures instituted universally?

Is there sufficient incentive? I guess there isn't. No doubt there are many doctors and others within the system who see the problem and wish it could be solved, but most don't understand the problems and see possible solutions, and those who do are in no position to effect the changes they would like to see.. In large bureaucratic operations, the power at the top is separated by many layers from the problems down below – and indeed, insulated from the human relations that impel any decent human being to want to solve the problem. Are they blissful in their ignorance? Maybe. Administrators are a different lot from doctors, and even doctors who become administrators can be sucked into the administrative maelstrom of ignorance and focus on goals other than patient care. If you have been a doctor, you know what problems beset the ill, you know what procedures militate against good integrative quality. If you are an administrator, you lack that experience. The best ball teams have former players at the top, some of whom are brilliant and can build great teams based on their knowledge and ability. Where are the Jerry Wests of medicine?

So, those in power might not have the knowledge necessary to detect the problem, and those with the knowledge might not have the power. So, the power of ideals is blunted by bureaucratic structure. What about external incentives, like money and prestige? Would they accrue from overcoming the iron structure of poor bureaucratic medicine? Would quality measures detect the better care afforded by coordinated care? Probably not; maybe a little. Certainly not enough so as to be palpable proof that “we are a superior medical center!” Local areas tend to be monopolistic, so in the end there are no local comparisons, and even nationally, they are hard to detect and not well publicized. Yes, there are awards and there are groups of hospitals that sign up for progressive high-quality agendas, but it takes a lot of effort to do this, and it's not clear that one receives any competitive advantage for aspiring to these higher ideals. If you are a high ideals leader of a medical center, you can do it, you can lead a medical center to high quality, just don't expect anything other than internal satisfaction and team celebration from having done it. Once again, as we are seeing in national politics, “high character” is essential.

But say the incentives are in place -- are there tools available? In a word, yes. Here in the NEJM article the anti-delirium protocols are poignantly present in the very person of the patient's daughter. I don't know the field well enough – I was an outpatient doctor – to know all the coordination tools available for high intensity inpatient care, but I'm sure they are there. They could be picked up and used, if there were a structure amenable to their use.

But in the end, of course, money rules. The medical centers are doing just fine, making lots of money, protected by their deep roots in the campaign financing lobbying system that we currently enjoy. If there were big bucks available for coordinating care, the resources of medical centers would be employed to drill those wells. ACO's might possibly supply some incentive, but it's minor in extent, and the fight over who gains what part of the extra bucks can be exhausting and disincentivizing – it's just not worth it, much of the time.

To coin a phrase, if we are to improve medical care, we need “deep structural change.” Until we have that, we will continue to read rueful articles where parents of doctors are enfolded in the arms of large systems of care where poor care is administered and the doctor-daughters find themselves unable to affect the machine they see abusing their parents and they issue a cri du coeur and the medical journal regretfully publishes it and we read of the horror and say to ourselves, maybe we'll go quickly, and we won't have to endure the insult medical centers add to injury.

Budd Shenkin
Posted by Budd at 9:51 AM