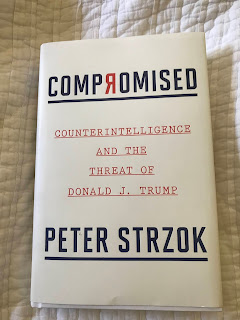 If a student of Trumpism is looking for subtlety, he or she will be disappointed. “Might makes right” and the “ethics of the unsupervised schoolyard” don't require much nuance. Thugocracy speaks for itself. Truth yields to alternative facts, the search for loyalty obviates the need for competence, cruelty and destruction and the willingness to be cowed take precedence. Untethered accusations carry weight.

In that world, then, proving your case may seem irrelevant. You may be right, but who is going to enforce it?

Yet, it isn't. The people in charge may make mincemeat of right and truth, followers might adopt the same attitude, but the majority of people in this country and the world aim higher. People who oppose the thugocracy need the mental ammunition to know they are right, not just go on common sense and belief. And in the case of the FBI, the long heritage of lying and intimidation and right wing activity makes every claim of the new FBI need to be supported by evidence. Trumpists may have the upper hand now, but the present opposition and the future need to see the truth. Plus, when you are falsely accused, you just have to defend yourself, and in this case, also defend your righteous organization.

Into that arena, then, steps Peter Strzok. Strzok is an honest man, an intelligent man, a man who rose within the FBI to the top of the counterintelligence. He was the one who headed the FBI's investigation of Russian intervention in the 2016 campaign and the connection to the Trump campaign. Coincidentally, he was also high in the investigation of the sleeper cell of Russians who passed for Americans and raised families as normal suburbanites while informing their Russian spymasters, and he was a lead in investigating the Hillary Clinton emails.

So, Strzok has more than one story to tell, as he defends himself from the vicious Trumpian attacks on his person and his work. I saw him on TV – he was smart and informative. And for my part, I'm a great fan of Le Carré, Philip Kerr and Alan Furst, so I read his non-fiction book. It was a good choice.

I recommended it to my recently-retired ex-roommate from med school, who had joined the Public Health Service just after internship with me. We worked in community health, me from headquarters in Washington, he in the San Francisco Region IX office. Our experience in government was eye-opening, the way going to college and going to med school and going together to Medellín, Colombia one summer, had been eye-opening. Each a different world, with their own worldviews, jargons, assumptions. The way belonging to a church is eye-opening. Different worlds, practices, words, assumptions, beliefs, culture. One great strength of Le Carré comes from his years in the spy bureaucracy. He knows procedures, how you work in a large organization. Without our experience in the PHS, we wouldn't have understood it the way we did.

So I wrote my ex-roommate this: “I'm just finishing Peter Strzok's book which I think is very good.  He is self-justifying against the allegations that they were anti-Trump spying, etc. I like especially, as a fan of spy literature (Le Carré, Alan Furst), its real life policier-espionage. Pretty well-written. Recommended.”

Here's what he wrote me back:

Competently written, excruciatingly detailed as to what counterintelligence is and how it works (at least on the U.S. side), but without any exciting revelations about stuff you didn’t already know — just a whole lot more granular. And interesting as well. What I particularly enjoyed was his description of how the SVR's (the KGB's descendent) Russian sleeper spies — with their two grown kids born in Canada — were inserted into the US; how they were surveilled and eventually arrested. Great story.

Strzok’s a cop and investigator, no doubt at the apex of his trade. He trusts nothing anyone says without verifying it five times over (unless it’s from a fellow FBI man).

What’s so odd for a really smart guy like him — at the apex of his trade — is how he could have been so absolutely stupid to use his FBI-issued cell phone to send text messages having nothing to do with his official duties. It might have been bad enough if these texts had been discovered on his personal cell, with his fairly minimal "anti-Trump” stuff sent to his FBI lover Lisa Page: the Trump people would have made the same attacks anyway.

Strzok presents the FBI as a vast, benign organization despite its ancestry: iron-jawed guys (he mentions just one female agent, I think) with the same haircuts, suits, shoes and ties, all of prime Boy Scout caliber: trustworthy, loyal, friendly, courteous, kind, obedient, cheerful, thrifty, brave, clean, and reverent. All his fellow agents are hands-down brilliant at their various subspecialties, whether it is interviewing or breaking and entering. Whether they are also adulterers is not revealed.

What gets my dander up is when I read the following, time and time again, throughout the book: that Strzok himself as well as each and every FBI agent is 1,000% "dedicated to upholding the Constitution and protecting the American People.” Whenever I hear “the American People” spill from some politician's or bureaucrat’s mouth, I tune out. I can understand it well enough in a stump speech or in congressional testimony…but 25 times in a book? C’mon.

I would have been fun to be a fly on the wall during a lot of this, to audit the banter and jokes that pass among these guys. I can’t believe that there’s never any locker-room type language being used, interspersed with the usual flour-letter words, which, by the way, Strzok is happy to use in his narrative often enough.

BTW, he is not Iranian: he was born in Michigan. His dad was a US Army Lt. Col.; he worked for the Corps of Engineers and was posted three times to Iran, where Peter attended the American School in Teheran.

I was puzzled by the Iranian thing - glad you cleared it up.

I know what you mean about repeating the mantra. I do think there is some non-ironic group think in the FBI mission among the agents. You see something similar in sports teams. You see it in medicine with "good of the patient." Some of it is honored, some of it honored in the breach, just with different balances in different organizations, different people, different times, and different situations. Churches are also good examples.

I agree about The Americans. I also thought the indictment of Hillary's stupid obstructionism and the heinous Cheryl Mills was very interesting. Hillary was so stupid technologically, and not smart enough to get good help with it and be well advised. Which tells you a lot about Hillary, which was fairly obvious from her behavior. Carl Bernstein's book was pretty objective, I thought, and quite damning. She rubs me exactly the wrong way.

I also agree about the detailed descriptions being interesting because of what you could observe without being told directly.

Glad you read it and your commentary was very helpful to me.

To enlarge on what I responded about Strzok's apparent cultural loyalty, why would he be so emphatic about that? We know it's not true in some instances – the New York station was reliably reported to be very anti-Hillary and feeding Giuliani stories. But think about a sports team, when one member or a group of teammates loudly proclaims their all for one and one for all, how they will all keep in training, where they will all be the others' first priority. This must go on all the time in the FBI, I would guess. And at this point it certainly is in Strzok's interest to reassert the mantra. The FBI has been decapitated. Odds are the body still misses the heads, or at least feels loyalty to them, and realizes that standing up for them now ensures their own support later on. We'll see.

Also, the decapitated leaders, so poorly treated, still stand a good chance of winning in the long run. All it takes is one election, and the guts of the new administration not to adopt the chicken's way out, live and let live. Me, I think it's time for American Nuremberg.

So, even though it is patently obvious that everything that Trump and Barr say and do is ridiculous and absurd and Orwellesque. No need to dwell on that. But if you really need to be convinced of the certainty of Russian involvement, and the hopes the Trump campaign had of capitalizing on it if they could just get themselves to be competent enough to effect it, then reading this book will leave little doubt. And if you want to see what real life Le Carré looks like, what you see in this book makes a lot of sense to my ex-roommate and me, who spent time in the bureaucracy, and have that feeling of recognition.