Post-Trump Reforms: Can Trump Be Prosecuted?

I have been all for prosecuting Trump. My argument has been, aside from visceral pleasure, that nothing says “wrong” like conviction and, hopefully, jail. Trump’s improprieties are manifest; it's only a question of picking which ones rise to the level of federal crimes and which are worth prosecuting.

What are the consequences of not prosecuting? I point to the comparison between Watergate and Iran-Contra. In Watergate, the law took its course, first under Archie Cox, then under Leon Jaworski. Convictions were obtained, jail time was served, front page pictures were rife. Many savored the perp walks. People were changed by their incarcerations. Charles Colson found God and prison reform. John Dean was steeled for a life of chastened righteousness and wisdom. Others simply lived with the ignominy; some were better for the ordeal, some not. It was a righteous result.

In addition, there were far-reaching, significant Watergate reforms, including the Inspector General system. And moreover, Watergate retains a stench. Say “Watergate,” and you can smell it. If they hadn't followed the law and let it ride, the stench would not have lingered.

The Nixon pardon was something else. It was bad politics then, and it was bad policy for all-time. If Ford, never known for his perspicacity, had worked out the possible consequences, not he, but some on his brain trust, might have foreseen that at some time in the future, if another President broke the law, the question of immunity might come up, and it would be a question rather than a certainty. As we now look back, we don't say, “Prosecute Trump, of course. What he has done was worse than Nixon, and Nixon was convicted.” He might not have served jail time, but conviction would have served as an important precedent of a misbehaving President.

For contrast, see Iran-Contra. Iran-Contra is a cautionary tale where pardons interrupted the course of justice for crimes against the constitution by high-ranking officials, possibly involving Vice-President George H. W. Bush, and possibly involving President Ronald Reagan. Taking advice from then-Attorney General Bill Barr, to the furious consternation of the investigators who were taking the case forward, on Christmas Eve of 1992, the month after he had been defeated for a second term by Bill Clinton, Bush pardoned the guilty officials and froze any investigation into himself.

Who were those he pardoned? Who remembers? But we should. Bush's line of explanation was so lame: “[The] common denominator of their motivation—whether their actions were right or wrong—was patriotism.” He criticized the years-long investigation run by Walsh as reflective of “what I believe is a profoundly troubling development in the political and legal climate of our country: the criminalization of policy differences.”

Who remembers what former judge Lawrence Walsh, the Independent Counsel who was pursuing the case, said at the time?

“[The] pardon of Caspar Weinberger and other Iran-contra defendants undermines the principle that no man is above the law. It demonstrates that powerful people with powerful allies can commit serious crimes in high office—deliberately abusing the public trust without consequence. Weinberger, who faced four felony charges, deserved to be tried by a jury of citizens.” He concluded, “The Iran-contra cover-up, which has continued for more than six years, has now been completed with the pardon of Caspar Weinberger.”

The answer to that question is: not many remember. The message was, as opposed to the message of Watergate, what Walsh said it was – the powerful can be above the law.

Therefore, what I have thought is that under Biden and whoever comes after him, justice must take its course. No accepting whatever pardons Trump might issue, no “forgive and forget,” no “let's move on,” no “the future rather than the past.” The past matters an awful lot when it comes to the future.

But, now comes this New York Times oped by law professor Eric Posner that says that pursuing Trump might not be so easy as we think it is. 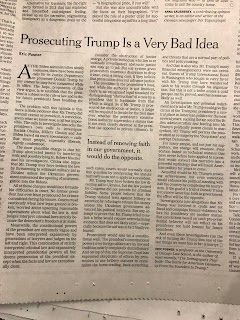 The constitution is intentionally vague on exactly what presidential crimes might be, the powers of the President have been increasingly expansive, and courts are reluctant to act against a President. Posner focuses on charges of obstruction of justice, bribery and extortion in dealing with the Ukraine, and emoluments. These would be tough cases, he says. They seem more solid to me than they do to him, but he's the law professor, and he's probably right. He says that what would be needed for successful prosecution would be crystal clear cases. Bringing a case against Trump where Trump might have a decent chance of beating the rap would be a mistake, Posner says, and I agree. Trump walking triumphantly out of federal court would be a horror show.

In addition to which, what Posner doesn't mention, is the apparent imminence of pardons, almost certainly for Trump’s friends and family, and quite possibly for himself. The self-pardon ultimately would go to the Supreme Court if he were to be accused of committing a federal crime. Even if the ruling went against him, the time spent determining the validity of the self-pardon would probably take Trump well along in his remaining natural life. The friends and family pardons, if appropriately constructed, will probably protect the miscreants from being prosecuted federally.

In other words, it seems probable that the whole Trump spree while in the White House will go unprosecuted in federal venues. The Trump post-transgression period will certainly not resemble Watergate, and might be even more benign to the perpetrators than the Iran-Contra fiasco, where at least there were some charges and some guilty pleas and sentences, although they were very light ones. In other words, the message to future Presidents will be, you are above the law, do what you want, you are impervious.

So, where does that leave us? Up the creek? Maybe so, when it comes to federal legal actions against the Trumps and other pardonees. But what Trump has done is so much more inimical to the integrity of the country under the constitution that either Watergate or Iran-Contra, that even if perp-walks and convictions and orange jumpsuits are not in the cards, the country needs and deserves constant spotlights on the depredations. (If state and local legal actions against the Trumps are successful, as they probably will be, this will help.) It could start with a Post-Trump Reforms Commission. List the depredations, harp on them, focus on what happens when you are on the honor system and a dishonorable group takes over assign responsibility, and fix the problems. Let everyone know very clearly what the depredations were. If the laws are too vague, that can't stop the repair process. You can't face the future with a limp.

But just because the legal system as currently constructed might protect the Trumps from federal prosecution, that doesn't mean that the country should be vulnerable to a replay with someone else. What we need to do is to take the obvious miscarriage of justice as a guidepost for enacting Post Trump Reforms. I have suggested a menu for Post Trump Reforms here. Included in those suggested reforms are detailing in more specific legislation what is required in cooperating with investigations, what exactly are the prohibited activities in consorting with foreign countries in influencing our elections, what are prohibited emoluments. Along with the enumeration of details, specific and severe criminal penalties also need to be specified. David Levine and I have suggested reforms to the pardon power, requiring the Speaker of the House to cosign all pardons, here.

Naturally, the Posner article impelled David and me to send a response in to the New York Times. We assume it won't be published – too much competition. But no matter; we like it, and you might, too. It reiterates some of the points I just made, but its brevity and cogency make it worth printing here.

Eric Posner might well be right that Trump's violations might not be prosecutable successfully under current federal law. The Founders relied on good character and the threat of public disgrace to rein in high public officials. Unfortunately, those moral guardrails are sometimes insufficient. Even if Trump is beyond reach today, for the future, we need to strengthen those guardrails with more specific laws and remedies.

For starters, Congress should spell out what emoluments are; spell out what constitutes illegally cooperating with foreign governments; spell out what truthful cooperation with Congress and investigators requires.  Legislation should enhance deterrence by making presidents subject to fines and prison for violating these clear rules, if not during the term of office, then afterwards.  While the President is in office, legislation should prescribe expeditious court consideration of inter-branch disputes, so that courts can issue orders promptly for real-time corrective compliance.

We need a strong and effective chief executive, but we also need a non-abusive one.

with aid, additions, and edits by David Levine