Vaxxing: Reason Won't Do It, But Moral Suasion and Requirements Will

They can't stop saying, what do we have to do to get everyone vaccinated? Here is the current chart in California by county, comparing number of recent cases (blue bars) to percent vaccinated (green bars), as printed in the East Bay Times on September 25th. It's pretty obvious that the longer the green bar, the shorter the blue bar, and vice-versa. Vaccination works. 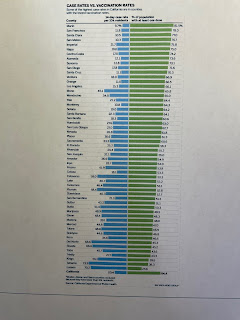 My friend John Swartzberg is quoted in the article:

“'This demonstrates in a poignant way something we have always known,' said Dr. John Swartzberg, clinical professor emeritus of infectious diseases and vaccinology at UC Berkeley's school of public health. 'The fewer people vaccinated in a community correlates directly with the risk of getting COVID-19.

'If data presented like this will not change people's minds about getting vaccinated, I don't know what will.'”

Exactly, and of course. But that presupposes several things. One, John supposes that all people share an intellect at least within hailing distance of his own. Which, of course, is not true. Intelligence obeys the Gaussian Curve, and guess what, not only are 50% below the mean, 25% are in the lowest quartile, and let's not follow that reasoning any further down.

Two, thinking that this chart should be self-explanatory and definitive, as it is to John and to me and presumably to you, dear reader, presupposes that the chart will be accepted as truthful. “But they're all lying to us, they have nefarious purposes, they say these things to get you to take the shot that will shrivel or burst your balls.” So, there's that, belief that what we say is true. It is so sad to say that this is not a given. But there is so much lying in the world, so so so much lying, that it is understandable that the man and woman in the street, the man and woman who is destined to be in an ICU someday soon in a theater near you, or someone who this unbelieving and suspicious man or woman comes into contact with, it is understandable that they won't be able to distinguish the distinguished personage who tells the truth and the undistinguished lying scum who lies without conscience and who lies out of habit and who lies because he or she doesn't even really know how to tell the truth. Not all of these people are named Trump, which is too bad, because at least then they would be readily identifiable to everyone.

“If we’ve been bamboozled long enough, we tend to reject any evidence of the bamboozle. It’s simply too painful to acknowledge. Once you give a charlatan power over you, you never get it back.”

Plus, there is the infectious nature of group behavior. It can be your neighbors, your workmates, your family, your political party, your tribe. Most people don't actually think for themselves, even those of us who are well-educated. It's pretty hard to reason out everything yourself, every time. Instead, you make your decisions efficiently, and the most efficient way of acting is doing what everyone else is doing, and then rationalizing it by thinking what everyone else is thinking. Thinking, actually, is most often making some sense of what you have just done, or are in the habit of doing, or are about to do because everyone else is doing it. Thinking is often an “afterwards function.”

Now, it does happen to be true that we sometimes actually think about things rationally, and make decisions based on evidence, and we are most likely to do that in the face of novel and threatening situations, although the “threatening” part has two divergent effects – it is alerting, so we are more likely to mobilize our critical thinking facility, but it is also alarming, and thus likely to impede our rationality by emotion. But we in medicine are used to that, so as medical professionals, we look at this simple but eloquent chart and say, “Yup! Makes all the sense in the world. What are those non-vaxxers thinking?”

And then there are the diverters, those who say “freedom!” Which is as full of shit an argument as we are likely to see in our lifetimes. There has been so much written about this fallacy and the intellectual corruption of its perpetrators, I won't go into it here, I'll just say, are you fucking kidding me? Freedom to die and make others die, a personal decision between me and my God? It's a diversion into intellectual mud and slime, so we'll let it rest there.

Finally, my profession of primary care pediatrician compels me to add: so many people “drawing their own conclusions” emphasizes once again how deficient our American system of primary medical care is. If we had decent primary care, if patients could easily access their trusted personal physicians when they needed him or her with few financial or administrative barriers, if you could ring up your doc for a chat – wouldn't people be swayed by that trusted advisor? If we are adding on a deck in the back of our house, do we really figure out all the engineering ourselves, or do we call on a qualified professional? Really, people. It's just another way our medical care system, for all its specialty strengths, has failed us. We turn to specialists to fix us after the fact, when an ounce of prevention administered by our personal primary care system and our public health system could have relaxed the requirements of having as many ICU beds and respirators and Regeneron as we now have.

So, if thinking that the eloquent simplicity of the California chart will clear minds and impel action is wrong, what is the alternative?

First, the mind. Instead of appealing to reason, appeal to morality. I have outlined the case that non-vaxxing is murder before, in fact, this very month. If you recklessly endanger others, as when you drive drunk, and you have an accident and kill someone, that was a foreseeable consequence and, morally, you have committed murder. How is non-vaxxing different? Only in the ability to identify exactly who killed whom when – but that there was murder, and that the murder was committed by one non-vaxxer or another, is clear. Thou shalt not kill – clear enough?

We should have national campaigns that say – Thou Shalt Not Kill, Vax Now. Let them argue about that, let them deny it, let them obfuscate it, but they will now be playing on our turf – Is it murder, or isn't it? That's pretty good grounds to argue on, better than so-called personal freedom.

That's the moral argument. But even more effective than that is extending what is already happening – trading your decision to vaccinate for society's decision to let you roam free. School, dining, shopping, traveling – the works. Society takes the responsibility to protect the public against drunk drivers, we have an even more pressing public health mission to protect the public against carriers of the deadly virus. Let the resisters whine – pediatric practices have found that when you confront patients with the choice of vaccinating their children or leaving the practice, the great majority will choose to vaccinate and stay, and the great majority of those families who have vaccinated will be grateful for the stance the practice has taken. Just do it. United Airlines appears to be betting on that, and I believe they will win the bet. Let others follow, fully, enthusiastically, joining the virtuous crowd of businesses and associations who protect society and simultaneously protect their own interests.

The group consequence of these requirements will shortly emerge – non-vaxxers will relinquish the ill-given respect for individual choice they now sometimes receive. Let them be segregated. All the group dynamics of action will turn in favor of the majority, as is already happening. No shoes, no shirt, no vax, no school no service no nothing – want to do it yourself and exercise your personal freedom? Go ahead, just do it by yourself, or with other likeminded Northern Idaho Texan secessionists.

So, there it is. Reason will take us only so far. Moral suasion and shame need to be added. Then the force of law and independently required restrictions on action will make the tide irresistible. There will be muddy puddles here and there of the voluntarily segregated, where ICU personnel can renew their training and where coffin-makers can ply their trade at a higher level, but the ineluctable path to endemicity will become a highway rather than a windy road, and the rear view mirror will hold the horror, rather than the windshield.

I will trust in that hope.