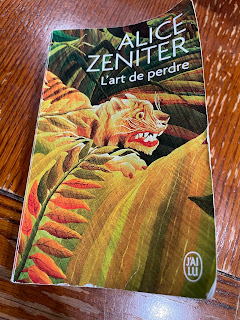 Sometimes you just don't know when a book is going to sit up and bite you and you fall in love with it, but it does, and sometimes you don't even know why. Well, it just happened to me this last month, as I read Alice Zeniter's The Art of Losing. It got a Goncourt Prize (lycée division – the committee sends out nominations to high schools and tallies up the choices – interesting....) for the author, age 31, in 2017. I read a review when the English translation appeared and I chose as part of my French project, now five years old, as I've graduated from classics to recents.

I can't do better in summarizing it than quoting Amazon:

Across three generations, three wars, two continents, and the mythic waters of the Mediterranean, one family’s history leads to an inevitable question: What price do our descendants pay for the choices that we make?

Naïma knows Algeria only by the artifacts she encounters in her grandparents’ tiny apartment in Normandy: the language her grandmother speaks but Naïma can’t understand, the food her grandmother cooks, and the precious things her grandmother carried when they fled. Naïma’s father claims to remember nothing; he has made himself French. Her grandfather died before he could tell her his side of the story. But now Naïma will travel to Algeria to see for herself what was left behind―including their secrets.

The Algerian War for Independence sent Naïma’s grandfather on a journey of his own, from wealthy olive grove owner and respected veteran of the First World War, to refugee spurned as a harki by his fellow Algerians in the transit camps of southern France, to immigrant barely scratching out a living in the north. The long battle against colonial rule broke apart communities, opened deep rifts within families, and saw the whims of those in even temporary power instantly overturn the lives of ordinary people. Where does Naïma’s family fit into this history? How do they fit into France’s future?

Alice Zeniter’s The Art of Losing is a powerful, moving family novel that spans three generations across seventy years and two shores of the Mediterranean Sea. It is a resonant people’s history of Algeria and its diaspora. It is a story of how we carry on in the face of loss: loss of country, identity, language, connection. Most of all, it is an immersive, riveting excavation of the inescapable legacies of colonialism, immigration, family, and war.

I wondered as I read how Zeniter came to write it, and how Naïma, the present day young woman protagonist, the third generation, came to be the central force of the book. Naïma wonders, who am I, where do I fit? There's a lot of special information, and a definite point of view. I was happy to find the Daily Star commentary:

Zeniter, whose father was born in the Kabyle region of Algeria, and whose grandfather was considered a harki for supporting the French, said that while writing her novel, she had come upon many such “secret pockets where we put all those whose trajectories embarrass us.”

Which is just what I wanted to hear. It's fiction, but this outline of her facts is the same outline of the book's facts, and how can the feelings be much different?

I'm not sure where the feelings that well up inside me come from. Maybe from my own family? I remember telling the story of my father's life, as I saw it, at the service for his death at age 92 in 2007, delivered in one of the meeting rooms at his retirement home, The Quadrangle, near Haverford College outside Philadelphia, where my sibs and I had done our most meaningful growing up – when asked where they're from, I think most people will give where they went to high school, and we all went to beloved Lower Merion. I recounted how my grandparents had come to America as children from Eastern Europe and settled where Jews settled, my grandfather being the first doctor in our family (and a city champion billiards player, they say), and my grandmother's family owning a bank. My grandfather died of a brain abscess and my grandmother's bank died of the Depression, but despite the obstacles my father became a neurosurgeon, couldn't stay on at Penn despite his brilliance because he was Jewish (he was also verbally combative and probably a pain in the ass, which didn't help), but made it on his own to national and even international recognition, and finally, here at the Quadrangle, lived in a religiously integrated society, which was more American, in a way.

Being a harki from Algeria, despised by official Algeria for reasons that didn't match the facts, as Zeniter makes clear, going from top to bottom in his life through no fault of his own, oh the pain of Ali, the grandfather. The tragedy. He was no traitor, he was a leader in his small community trying to make things better for his people, not someone who joined the French in oppression.  And the FLN - patriots, really?  Cruel, with their own advantage to cultivate, their own property and belongings of others to confiscate, their own perks of leadership to exercise.  No fault of Ali's, but the currents of life, politics, and war. He was lucky to be alive, although is original family was fractured. The pain of Ali, who did such a good job of being father of the family in the mountains where the Kabyles live, and who was reduced to a shadow of himself in the camps, but was not pathetic, was still prideful and a leader in his little group, but tragic. His little wife Yema, married to Ali as his second wife at age 14, who never learns French but persists as a spirit and a cook and a carrier of Algerianism and who hugs tight because that's what Kabyla women do, and has about 10 kids, which Naïma can't figure out exactly how they do it because Ali is huge and Yema is about 4'9”. But that's what they do, have kids. Ali doesn't talk about his World War I experience, he doesn't talk about the pain of dislocation, but we see it and feel it.

Then comes the eldest son, Hamid, Naïma's father, squeezed between two generations of immigrant and French-born, who is clever and navigates the French world for the Kabyles, and then who marries blond Clarissa, who was 19 when they met romantically in Paris. Zeniter observes that integration of immigrants occurs when the immigrant impregnates a native born French. Maybe so. They face their problems of intimacy and acknowledging their backgrounds and their feelings and their shames and their love, they have four kids and according to Naïma, there history stops for them. They are then just parents.

Then comes Naïma, the third of the four daughters of Hamid and Clarissa, Clarissa who finds the love of Yema without their being able to speak much to each other, and Naïma who reflects that same love. Ali won't speak of the past and then he dies. Hamid won't speak much about his own immigrant experience, and of what little he knows about Kabyle. But the quest for origins lies heavy within Naïma, why that is she doesn't know, and her route to Algeria comes from an unlikely source, her boss at the art gallery where she works, and with whom she is having a long affair. He assigns her a retrospective of a Kabyle artist living near Paris, Lalla, whose works she must collect. He becomes like an intimate uncle to her, and she must go back to Algeria to collect some of his works, and meet his family, and then inevitably, even though she had thrown away the telephone number that Yema gave her of the one relative she could call, of course she must meet her own. Ali couldn't go back for legitimate fear, Hamid also from fear, but Naïma can.

I wish so much I could go over the details with you, and explain them, and savor them. It's the details that make a story whole, that make characters people and situations live, and yet here, I'm just telling you about the outlines of the story and my feelings. But that's all I can do. I'd love to read it chapter by chapter and discuss, and reflect, because the book is really that deep. I just love Naïma, and I think I love Alice Zeniter, the way you love an author who writes a book that you know it's for everyone, but isn't it especially for you? That's the way I felt about the operation on my pituitary tumor by an approach through the nose and my sinuses, not having to cut my head open. Yes, Charlie Wilson invented the operation for everyone, but I appreciated the gift as though it were only for me. And it would be especially hard for me to impart everything because I read it in French, which meant on the one hand I read it slowly and really savored every word, but on the other I was doing two things at once, story and language, so the the story came a little indirectly. Actually, though, I think reading it in French made it more direct than in English, and I loved it more. Maybe the thing is that I haven't discussed it with anyone, and I'm not going to go back and read it again and take notes.

I used to tell kids when they visited me for their pediatric check ups and summer vacation was coming up, that if I could give them an assignment for the summer, it would be this: this summer, find a book you love. That's it. If you care reading something and it doesn't really grab you, you can finish it if you want or you can put it down, but the assignment stands: find a book you love.

Well, with L'art de perdre, I completed my own assignment. And instead of learned and intense discussion of the people and the ideas and the situations and the politics and injustice and human spirit and families and the nature of love, I'm just conveying to you how I fell in love this summer, or maybe this fall, whenever it was, and maybe I'll go back sometime and read it all over again.

You can do that with books.