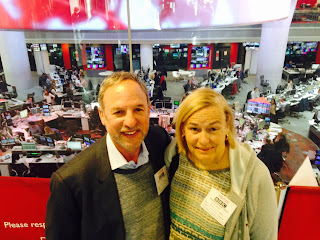 What does one do with unpublished and unpublishable writing? It used to be that you could type it up on a typewriter and stick it in a file cabinet, so you could be discovered after your death as a “genius undiscovered during his lifetime.” Or as a schizophrenic. Whatever.

But the digital age has changed it all. We use word processing instead of a typewriter, and we have blogs. Blogs! No longer need we file it away in our house for our mother to throw it all away – sorry, that was baseball cards. Crazy writing she might keep. But no, now we have blogs. We can type away on our computers and post it on a blog for all to see. URL's are marvelous things, accessible to all.

So I have blogged away, usually feeling that each entry is to be read chiefly by my friend Bob, who dutifully and enthusiastically comments nearly instantly on each one. But that's enough! One reader is enough for me, especially if it's Bob, who rarely has anything negative to say, and when he does, it's artfully couched in terms that will not offend. For truth be told, he writes a blog too – TheBobLevin.com, and I read and am enthusiastic and couch any criticism artfully. It's a wonderful arrangement.

But then there is counter evidence to my supposed small readership. As of this writing Google tells me that I have had over 108,000 page views for the life of my blog! That's a lot, even if my own looking at my pages counts, which it does. Some of my blogs have been picked up by friends and colleagues and tweeted to the attention of others and I've had a lot of views for some of my posts – my August 2011 post on my trip to Neurosurgeryland, my post on the NFL crisis with Ray Rice and how I traced it to a lack of pediatric training, wanting to yell to Ray as I saw him on his video, “Ray! Use your words!” So, others beside Bob do read it.

But then this week occurred a great coup de théâtre. Believe it or not, sports fans, but after my ScotRail post, I got an email from Brian Milligan, who might not be a household word yet, but he writes on personal financial affairs for the BBC on-line – that's right, the British Broadcasting Company, the biggest such institution in the world! Contacting little me. I blush.

Seems as though some search engine had picked up my blog for a consumer transportation website in the UK, and Brian had found it there and read it. Seems as though this train ticket issue has been observed and protested about before, and seems as though we are the perfect test case. For others, issuing vouchers instead of credit card credits is a pain, such a pain that most afflicted passengers just let it go without claiming them or cashing them in. But in our case, visitors to the UK, it's perfectly clear that we will never be able to reclaim our money, which has essentially been stolen from us by unethical business practices by ScotRail. Perfect test case.

And, as Brian explained when Ann and I met him for an interview on Monday – happily, our hotel, the Langham, was literally across the street from BBC London – the British rail system has been pressed by the EU to adopt a more reasonable policy, but the UK-EU situation being what it is, the UK has resisted.

And so, Bob, and anyone else who might be reading, come this weekend, we expect that Brian will be posting an article on our plight and the more general issue of this policy on the BBC on-line. And, odds are that Ann and I will have our picture along with it. I feel like Paul Lynde in Bye Bye Birdie, when he envisioned himself being on the Ed Sullivan Show – “Ed Sullivan!  Ed Sullivan” he intoned dreamily, in one of the best numbers ever on Broadway. Hear me as I intone, “BBC!  BBC!”

And then, after the interview, Brian showed us around the BBC building top to bottom. He thought that there's “not much to see,” but that wasn't our view. Interesting and impressive.

And I asked him if he could put the URL for Budd's Blog in the article so I could get some more hits. But whether or not he does, I know Bob will read it.

Budd Shenkin
Posted by Budd at 6:48 AM