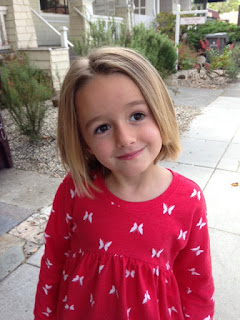 You just never know where it will come from, you just don't know. I'm not even her real grandfather, I'm her step-grandfather, but Sara asked me before she was born if I would consider myself her real grandfather. I was surprised, delighted, and honored – I wish I could come up with less hackneyed words, but there they are, and they are commonly used together for a reason, I think. It's like there is a syndrome of feelings that go together.

And so it has been with Lola. I have always considered it an honor when a child likes me. Or a dog. Why I should feel that way, I don't know, but I think it gets communicated subliminally, because children and dogs tend to like me. Maybe I smell OK. Or maybe I'm uninhibited enough and fearless enough to solicit their interest, and they feel the same way, too, that they are honored when someone wants them to like them.

I've worked for it, I know. I have taken care of her a lot, taken my responsibility seriously, and known that she was a gift. And she is adorable. Even other people outside the family say so, that she might be something special. Of course, who knows? When I was with Allie and his newborn, his first and likely only biological child, in May, we rode together and he said, “You know how everyone has these babies, and they show them to you, and you're supposed to say 'Oh aren't they cute!' And you do say that, and they're happy, but really, the kids are just kind of annoying? But then when you have your own, like Tete (his new daughter), you see them and you feel this thing for them, but you know that others must think the same thing that you thought?”

So I said to Allie, “Yes, but she really is cute.”

And he turned to me even while he was driving with a look I can only call avid, and said, “Isn't she??!! Isn't she!!”

So, you have to be careful and just talk subjectively about your near and dear, because objectivity is really impossible. (But, really, isn't Lola wonderful, really???)

I remember our sitting out on our neighbor's steps when she was two and singing “I hear music and there's no one there!” And then we watched the Youtube of Call Me Madame, which I actually hadn't realized it came from. And later on we heard it somewhere and Lola said, “Baba! That's our song!” It's those afternoons of sitting and walking and listening to the birds and telling some stories about the Pied Piper of Hamlin, and the story about how Lola was born (“Baba, tell Felix about the day I was born!”) that sit in the back of memory for a very long time and make life a good thing.

So, yesterday was Father's Day. I don't make a big deal about it, because my policy is not to have expectations, and anything that comes up is a plus, and there are no minuses. We came home from The Vault, our usual Sunday breakfast, and as usual Lola was with us, Grandma and Baba, for the morning. This day we sat at home comfortably and I put on some shows for her and I worked on my computer putting together a list of opening and closing tasks for a family member visiting our vacation house. It was quiet and nice.

But something was happening that I wasn't aware of. And then, all of a sudden, Lola came in and said, “Baba, come here.” What was up? I hadn't noticed anything, I was typing. But first, she took me to the little sunroom we have, where I have sometimes sat with her and read her some stories, and where we sometimes have played board games (every play Trivial Pursuit with a four year old?) on the floor. There by the chair she had a brie sandwich she had helped make, with lettuce and whole wheat bread, and for some reason, since I was wearing my sneakers, she had my shoes up there on the little table by the chair. Couldn't figure that out. It was only 11:30, but I guess I could be ready for lunch. I can pretty much always be ready for lunch.

She had taken her favorite blanket that she wraps herself in on the couch when she is watching Paw Patrol, and she had put it over the transom of the sun room exit to the garden. It's white and pink, but it was pretty clearly a red carpet.

So we walked over the transom to the outside and she had some stuff laid out. Over to the side where “our turtle” is, a one foot ceramic turtle she and I had bought at Orchard Garden Supply, and which now forms part of our “turtle collection,” she had put a bottle of Pellegrino water. She loves “bubbly water,” and we drink a lot of it. It's a treat. An unopened bottle, sitting there by the turtle in the garden.

And then over in the corner of the garden near the gate she had put my Warriors' cap. My Warriors' cap, after we had been to the Championship Parade on Sunday with her new dad Eric, and with Peter.

And back in the house she had a grapefruit for me that she had picked off our grapefruit tree.  On Friday we had picked one off the tree and each of us tasted it -- I liked it, she didn't, but she saw that I did.

What was all this about? It turned out that on Saturday she had been to her school friend Leo's birthday party – about eight boys and two girls, one of which was Lola – and they had had a treasure hunt, her first. So this was her treasure hunt for Baba.

Tell me what a full heart is. You tell me, because I can't put it into words.

Budd Shenkin
Posted by Budd at 7:56 AM